A Tale of Two Amendments

In West Virginia yesterday, a 14 year old junior high student, Jared Marcum, was ordered by a teacher to remove his t-shirt, which the teacher considered offensive.  Marcum refused, and attempted to explain to the teacher his right to wear said shirt.  His fellow students in the cafeteria stood on benches and tables and began chanting in support of Marcum.  The police were dispatched and Marcum arrested for “disrupting the school process.”  Here’s what he wore: 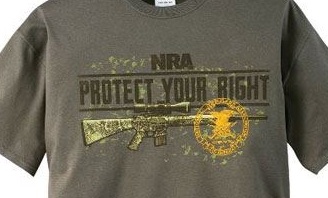 Mesh tops and dog collars are also (praise be!) banned.  But nothing about political statements or images of guns per se.
_

That Offensive Bill of Rights

It’s impossible to know the full thought process behind the teacher’s action.  What we will be officially told is that he was merely using his discretion to prevent anyone from being offended, or from an argument or dispute arising.  The preposterous claim that Marcum “almost incited a riot” is a flimsy fig leaf, indeed.  It was the teacher’s response to the shirt, not the shirt itself, that sparked the raucous but harmless protest.

1) You can’t offend-proof the entire world.  There’ll always be somebody that’ll be butthurt by something  — a crucifix around someone’s neck might annoy a jew, while a “Jesus Never Existed” t-shirt is bound to steam a christian.  Does this teacher comes down equally hard on students who might offend Bengals fans by wearing a Steelers jersey?;

2) Marcum’s t-shirt was a simple affirmation of:

“A well regulated Militia, being necessary to the security of a free State, the right of the people to keep and bear Arms, shall not be infringed.”

(Please tell me this was not a Civics teacher!)

Marcum’s interpretation of the Second Amendment likely differs from that of the teacher, other students, and almost definitely me.  His support for the Bill of Rights, however, ought be shared by all of us, and his free exercise of speech not be abridged.
_

The Right complains that the majority of school teachers are liberals, and that they are indoctrinating their students.   The first is an irrefutable fact; the second, I always considered false conjecture.  I’m not so sure anymore. Last year, we heard the (yes, Civics) teacher wrongly tell her students that it was a federal crime to speak out against the president.  Now we have this.

When I was a schoolchild during the era of Nixon Ascendant, it was a comfort when a few of my teachers, always scrupulously neutral in front of the class, clandestinely whispered to me that they were against the war, too.  But, now that I think about it, there was subtle indoctrination as well.  I remember lectures on how wonderful the American Melting Pot was, and being led in song, us little suburban white kids swaying and holding hands with the little bused-in black kids as we belted out “We Shall Overcome”.

That message of accepting diversity and rejecting racism was the same I got at home (sans the singing and hand-holding.)   Isn’t that where those sorts of messages belong?  Did my elementary school teachers have the obligation or the right to countermand the message other classmates were receiving from their parents, that the coons and the spics were lazy, worthless, and to blame for everything?  Those are not rhetorical questions.
_

The Care and Feeding of Your Free Speech Rights

The right to free speech is not absolute in all circumstances or at all times.  The courts have uniformly ruled that, so long as a citizen has access to the exercise of free speech in some areas, it can be limited in others, like a school.   Nor are things like slander, libel, or inciting a riot (for real) — or that most hackneyed of Civics teacher examples, shouting ‘fire’ in a crowded theatre — covered under free speech.  Schools in particular also have a compelling reason to limit the extent of confrontational speech to deter bullying and disruption.

It’s a fine line between proscribing slurs or confrontational behavior, and imposing a cultural or political status quo.  For the greater part, the teachers of my youth did an exemplary job navigating that line.  There are alarming indicators that many of today’s teachers, along with progressives at large, have strayed far over the line.
_

In George R.R. Martin’s Game of Thrones saga, the primitive Dothraki people confirm each statement, whether fact, lore, superstition, wives’ tale or wild rumor, with “it is known.”   Such unquestioning absolutism is rife among the more strident segment of the Progressive Left  (for whom I have coined the term “proglodyte”.)

In the minds of  proglodytes, “it is known” that their view on an host of issues, from gun control to abortion, from the meaning of gender to immigration, is established fact.  Proglodytes also view the world in black and white, with everything “We” believe as Good, and everything “They” believe as Evil.  This leads them to fallaciously attribute, for example, a solidity to their opinion that more gun control is a good thing (and should be taught?) on par with the solidity of the fact that Evolution is true, and that it, but not Intelligent Design or Creationism, should taught.

We cannot, nor should we, prevent teachers from ever influencing their students.  A good Civics teacher would be teaching Heller, and stimulate, not stifle, debate by asking his or her students to compare the opinion and dissent to their own interpretation of the Second Amendment.  In other words, to encourage them to think for themselves.
.

Anyone who espouses an idea must be willing to let that idea stand the test of debate and refutation.  They must be willing to entertain opposing arguments and to permit the expression of antithetical ideas.   The banning of a T-shirt may seem innocuous, but it is the first step down the slippery slope to fascism.

You Have the Right to Be Assassinated

This is a public service announcement:

You have the right to be assassinated.

In response to an inquiry by Senator Rand Paul, Attorney General Eric Holder confirmed that American citizens have a Constitutional right to be assassinated on U.S. soil by the President whenever he wishes. This right had formerly been extended only to U.S. citizens on foreign soil, like Anwar al-Awlaki, who was guilty of being suspected of aiding terrorists, or al-Awlaki’s 16 year-old son, Abdul, who was guilty of being al-Awlaki’s 16 year-old son.

Paul had asked drone-murder aficionado John Brennan whether “the President has the power to authorize lethal force, such as a drone strike, against a U.S. citizen on U.S. soil, and without trial.” Brennan, noting that the CIA only assassinates abroad, passed the question to the Justice Department. In a letter, Holder reassured Paul that the right to death by presidential decree does exist:

“It is possible, I suppose, to imagine an extraordinary circumstance in which it would be necessary and appropriate under the Constitution and applicable laws of the United States for the President to authorize the military to use lethal force within the territory of the United States.”

As examples of such “extraordinary circumstances” Holder mentioned 9/11 and Pearl Harbor. Silly FDR shipped Japanese-Americans to internment camps, when under the Constitution, he could have just killed them! But there’s no need to worry that this power would ever be misused. Holder promises that “were such an emergency to arise, I would examine the particular facts and circumstances before advising the president of the scope of his authority.” We’re in good hands.

In a recent white paper, Holder detailed the constitutional process under which you will be assassinated: when “[an] informed, high-level official of the U.S. government has determined that the targeted individual poses an imminent threat of violent attack against the United States.” This is entirely in keeping with Amendment VI, which states:

“In all criminal prosecutions, the accused shall enjoy the right to a speedy and public trial, by an impartial jury …; and to be informed of the nature and cause of the accusation; to be confronted with the witnesses against him; to have compulsory process for obtaining witnesses in his favor, and to have the assistance of counsel for his defense.”

Because Amendment V stipulates that “[n]o person shall be … deprived of life, liberty, or property, without due process of law”, some foolishly “have argued that the President is required to get permission from a federal court before taking action against a United States citizen.” Holder cleared up this common misunderstanding in a speech last year. “‘Due process’ and ‘judicial process’ are not one and the same” — a definition Holder made up himself, cutting through red tape to expedite the airmail delivery of your Constitutional Rights package.

Despite whining from ignorant people that “a presentment or indictment of a Grand Jury” is required before a person can “be held to answer for a capital, or otherwise infamous crime,” it’s perfectly OK for the president to play judge, jury and executioner. That’s because: 1) Congress is “regularly informed” whenever “lethal force is used against United States citizens”; 2) We’re at war, pal, and the president can off anybody he likes in a war. But rest assured, for only   President obama can make the final decision whether you will be assassinated. It’s obama who keeps the Secret Kill List, obama’s finger that points to the face of the one to die next. We’re in good hands.

So, if you ever hear a strange buzzing overhead, or get a rude knock on the door in the middle of the night, it means your Constitutional Rights are about to be exercised.